|}
The physics of this game (Goat Simulator) are ever so very related to real life, as when a goat is in the anti gravity mode, its body is modified to make itself a form of realization for itself; that something that most goats are silently suffering with, and the feeling it gives you and the goat when it it flying through the air is exhilaratingly, surprisingly releasing. This can be interpreted in many different ways, as in the book, Battle for the Nether: An Unofficial Minecrafter’s Adventure, it says, on page 242, “‘_Anticipation of a thing can be worse than the thing itself_’”. This tells me that with the goat’s anticipation of falling, it is fearful, and may never want to come down. And contrary to what many may think of a goat at first sight, it just wants to run. And run away, and cause chaos and destruction to a town and/or people, and fly. And that, is just one of the many reasons why I think goat simulator deserves to be the most realistic simulator around. In the game Who’s Your Daddy, I think that Who’s Your Daddy has a large lack of emotion tied to it; it lacks a certain aspect that makes you say, “Wow, I can really analyze what this child is thinking in the moment where he stuck the knife in the wall socket,” or, “Wow, I feel that the toaster that my homosapien child character player has has a very big meaning to the plot of this game, and helps me understand more into the baby’s emotional and spiritual health.” I never saw those aspects, and it made me feel disconnected when I was playing. I didn’t feel an attachment to the characters at all, and they showed no emotional growth. The parents had continually left that child to die, serving no help in forms of conflicts in the plot; I really just felt as if the game did not care about how you ended up. On the other hand, Goat Simulator really showed me the emotional, physical, and spiritual growth of my player character and how it could always be improved upon, as it gave me achievements when I did something correctly, and when I was wrong, I was sent flying through the air: another reason and situation I can not only  apply to the life of a goat, but also a human, as we often also feel the need to fly off and never worry about anything again subsequent to faults we have portrayed and mistakes we have made. It helps you connect and grow closer to your goat companion, understand each other and you feel a strong attachment to it; when it fails, you fail; when you’re sad, it’s sad; when it is successful, you are successful. You know that the goat has gone through challenges, and it has grown, and it has developed as a character to really define the meaning of a hero. In the amazing novel by Jeff Kinney, Diary of a Wimpy Kid, on page 6 it says, “Nowadays, it’s a whole lot more complicated. Now it’s about the kind of clothes you wear or how rich your are or if you have a cute butt...” I think this really puts what society has become over the decades and the new expectations for people on the societal chain in a new perspective. It tells us that we are expected of us things that are most of the time out of our reach, and when we stray from those, we are harshly shut down and shut out. This can definitely explain yours and the feelings of the goat’s feelings of fear and wanting to hide and run away. This shows that the challenges that we go through are greatly applicable to the life of many animals, including a goat’s, and tells us that the standards of society are not about being who you are anymore. It is now about physical and worldly things, such as money or clothes or the sacred parts of your body, which make the success of others much harder to obtain. It gives us a look into a goat’s life and a goat’s problems, and it tells us that us and goats are really not all that different, and are greatly similar in many ways. The game shows this by letting you control the goat and become one with it, you and the goat are breaking society’s standards in what nowadays would be called a rampage of expressing yourself. We are rarely allowed to do that society-wise anymore, and so the humans in the game respond accordingly, with fear and being startled and shaken to their cores. So, in conclusion, Goat Simulator is not so much a simulator of the life of a goat , but is a metaphor of life, and is for the viewing of humans to break free from society and express themselves and be who they truly are for a change, making the reactions of the looming, onlooking, harsh, and judgmental personalities of society seem childish and insignificant. It is a way for children, the elderly, and everyone in between to look past society and what others think, even if they are trapped in a shell of anxiety in their daily lives. The game tells them not to worry about what others think, and to break free of the expectations of others, and to give them a bond that very well could last a lifetime. Between human and goat. This is why I believe that Goat Simulator is the most accurately portrayed “simulator” in accordance to life, and deserves the high praise of others. Thank you.
{|style="border-spacing:8px; margin:0px -8px;"
|class="MainPageBG" style="width:45%; border:1px solid #cef2e0; background:#f5fffa; vertical-align:top; color:#000;"|
{|width="100%" cellpadding="2" cellspacing="5" style="vertical-align:top; background:#f5fffa;"
! 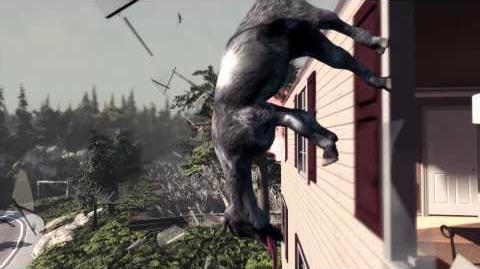 Want your community included? See how!

Retrieved from "https://goatsimulator-archive.fandom.com/wiki/Goat_Simulator_Wiki?oldid=5906"
Community content is available under CC-BY-SA unless otherwise noted.